The 3 banks are expected to report their 1QFY19 results in early May, with UOB confirming it will release its earnings before trading on Friday 3 May.  In FY18, DBS, OCBC and UOB averaged 19% net profit growth from FY17 (following on from 11% net profit growth in FY17 from FY16). 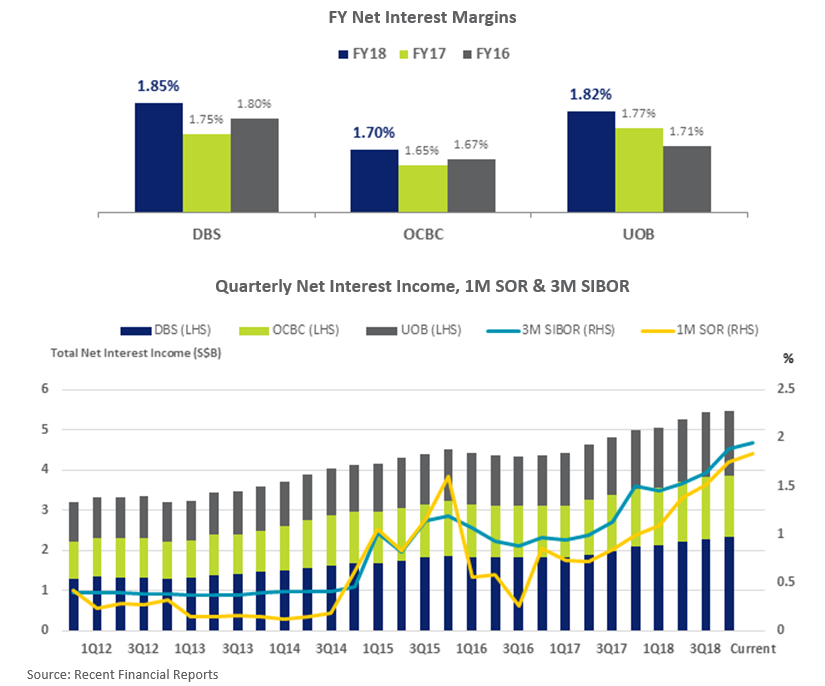 Combined, the quarterly net interest income for the 3 banks has gradually grown in recent years and has been consistently above S$4.0 billion for each quarter since the end of 2014. Moreover, combined quarterly net interest income was above S$5.0 billion for each quarter in FY18. This has coincided with gradual increases of local interest rates as represented by the 1-month Swap Offer Rate (“SOR”) and 3-month Singapore Interbank Offered Rate (“SIBOR“).

Banks Maintain 4% Yield for Past 6 Months

As of the end of March, the average indicative dividend yield of the 3 banks stood at 4.2%, which has since retraced to 4.0% with the strong gains of the banks in the April month-to-date.  At the end of March, the average yield of DBS, OCBC and UOB had ended each of the preceding six months above 4.0%. This was the lengthiest time in their recent trading history that the average dividend yield for the 3 banks had consistently held above 4.0% at month end.

The average indicative dividend yield of the 3 banks at month-end dating back to major market lows in mid-2009 are illustrated below.