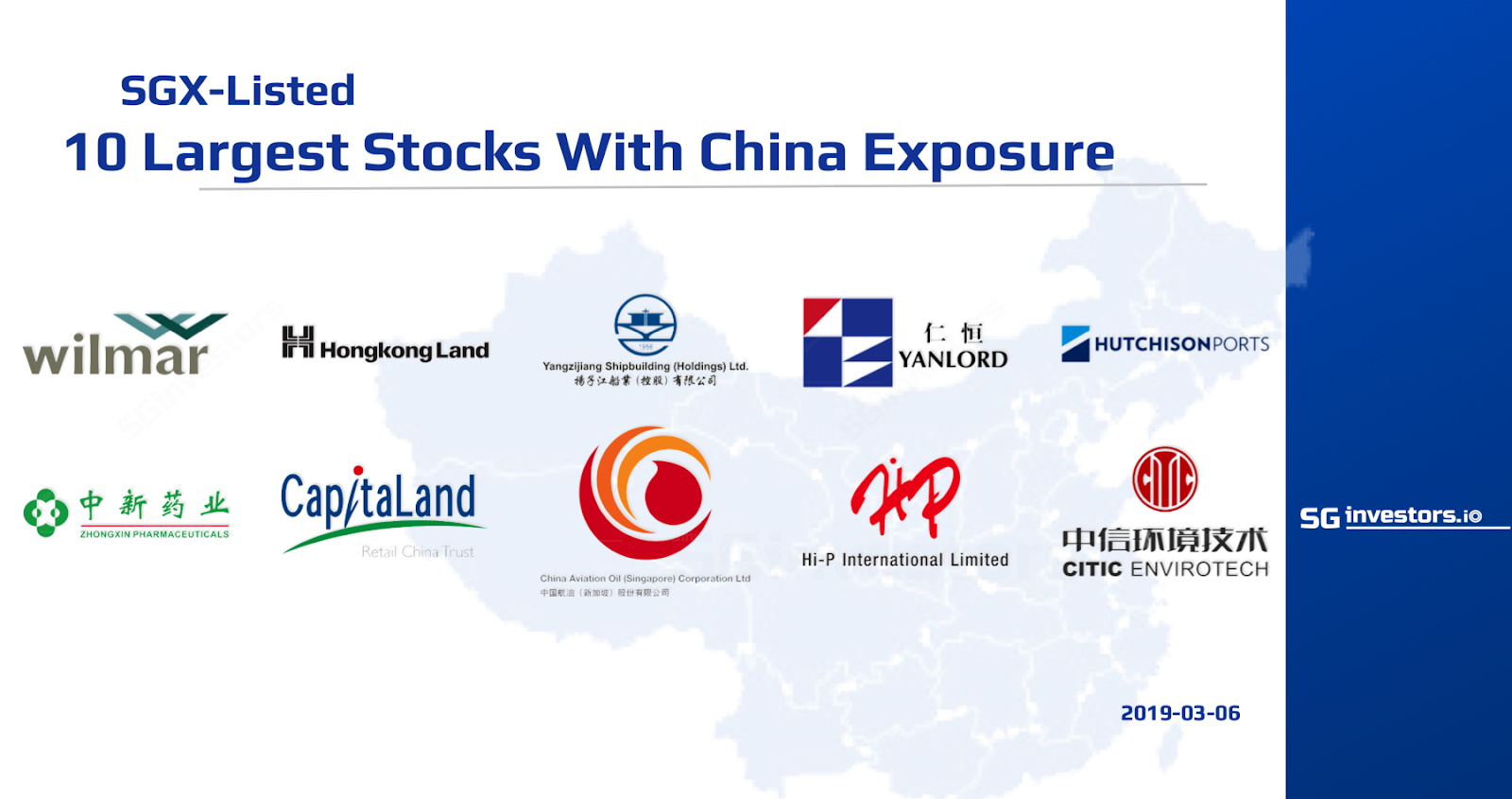 China was again Singapore's top trading partner by value in 2018, making up 12.9% of the total value of all Singapore's imports and exports. This was up from China trade contributing 10.0% total trade value in 2008, and up from its 4.9% contribution back in 1998.

Naturally, Singapore also lists a number of companies and trusts with their principal place of business in China. This is complemented by multiple Singapore-based companies and trusts that generate revenue in China or base assets in China. Close to 200 stocks listed on Singapore Exchange (“SGX”) reported somewhere between 10% and 100% of their last financial year revenues to China.

As reported this week, China’s 1Q19 GDP grew 6.4% from 1Q18, in line with its 2019 target range of 6.0% to 6.5%. The GDP report for the world’s second largest economy was a focal point of the week, particularly given the warnings by IMF Managing Director, Christine Lagarde in early 1Q19. Speaking on a CNBC Panel at Davos, Ms Lagarde conveyed the economic slowdown in China was legitimate and could pose a major risk if the downtrend started to accelerate.

Various reports have indicated a rebound in economic activity in China in 1Q19 in significant segments such as industrial production, new loans and consumer sentiment.  These reports have supported Premier Li’s recent assessment that the China’s economy in 1Q19 has been steady with some positive changes. Support measures have include reserve-requirement ratio cuts in January, money supply expansion and structural reforms to support the private sector, in addition to small and micro-sized businesses.  In the meantime, the IMF Global Stability Report reported last week that emerging market asset prices have recovered from their mid-2018 sell off, with portfolio flows to emerging markets turning positive and supported in part by increased passive investing tied to index benchmarks.

Likewise, the 10 largest capitalised and actively traded stocks on SGX that report the majority of their revenue or base the majority of their assets in China have outpaced the Straits Times Index (“STI”). As illustrated below, the 10 stocks have all gained in the 2019 YTD, averaging 24.5% total returns, following on from average 21.5% declines in total return in 2018. 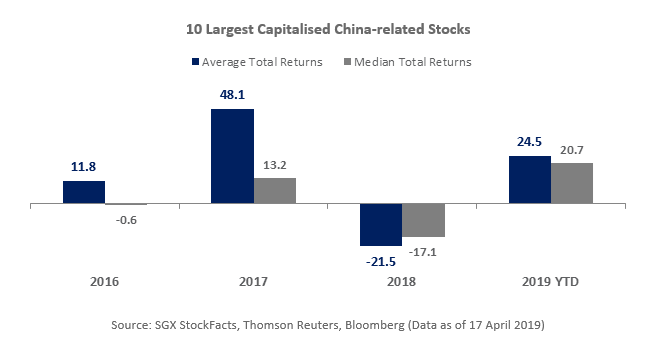 
The above ten stocks span multiple industries and are all currently trading at Price-to-Book (“P/B”) valuations similar to what they have averaged over the past five years. The three best performers of these  10 stocks in the 2019 year to date were Hi-P International, China Aviation Oil Singapore and Yangzijiang Shipbuilding. These three stocks have all seen net institutional inflow over the 15 weeks ending 12 April, with Yangzijiang Shipbuilding seeing inflows of S$108 million.

There are also existing indices that provide a performance measure of Singapore's largest capitalised China-related stocks. The FTSE ST China Index is made up of approximately 20 stocks of the FTSE ST All-Share Index that have reported either at least 50% of their revenues from China, or reported at least 50% of their operating assets located in China. As highlighted in a Market Update last month (click here) SGX also lists for trading five China-focused Exchange Traded Funds that seek to replicate major market indices return in China.