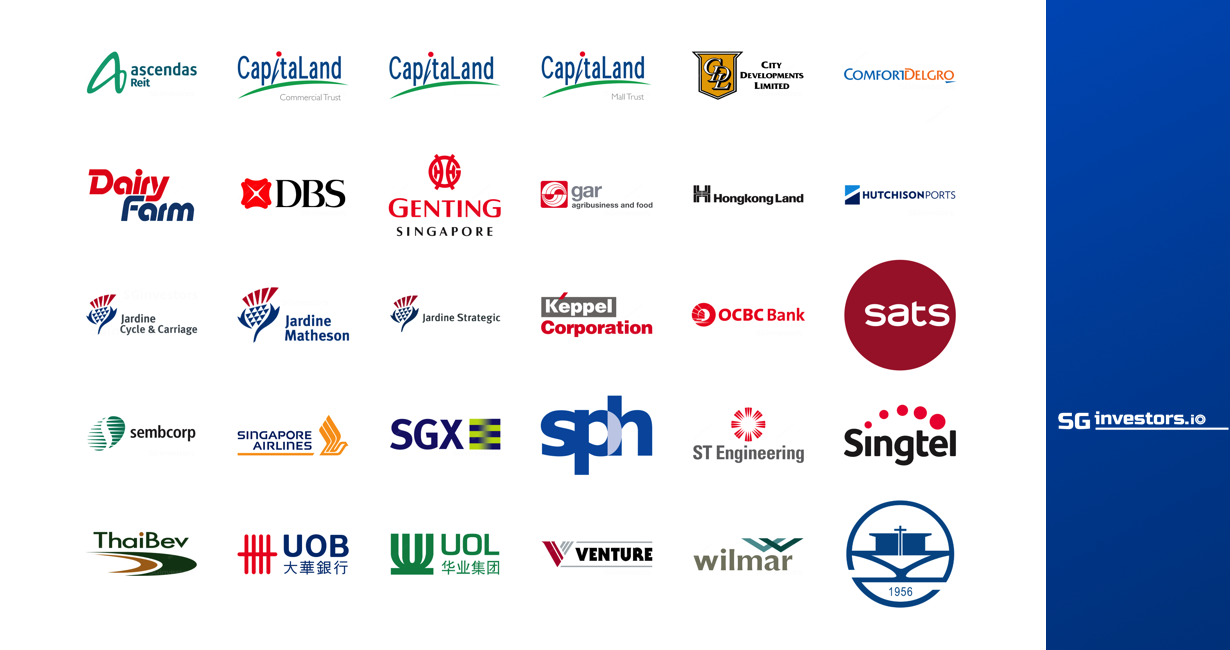 The Straits Times Index (STI) is a highly diversified benchmark for the Singapore stock market consisting of 30 of its largest capitalised and most actively traded stocks. In the 2018 year through to the 6 September close, the STI has generated a 4.5% decline in total return which has followed a 22.0% total return in 2017.

Results of the September STI review were published after the market close today and can be found here.

The inclusion of Dairy Farm means the ICB Consumer Goods Sector will now have four representative stocks representing between 6% and 7% of the STI weights. The indicative Sector weights, based on the relative weightings of 29 June 2018 (click here) are illustrated below.

The other three stocks representing Consumer Goods are Thai Beverage, Wilmar International and Golden Agri-Resources. Note that the three Banks make up approximately 41 percentage points of the indicative weight of the Financials Industry shown above at 58.1%. The remaining 17 percentage points are made up of Real Estate Management and Development stocks, Real Estate Investment Trusts (REITs) and Diversified Financial Services.

However, since the end of the June quarter, the share price of Dairy Farm has gained 2.2% in SGD terms, compared to the STI declining 3.7% in price. Without taking into considerations the performances of all STI constituents, the recent relative performance of Dairy Farm indicates that its weight in the STI could be marginally higher than 1.2%.

The potential new weightings based on publically available weights dating back to the 29 June 2018 are tabled below. 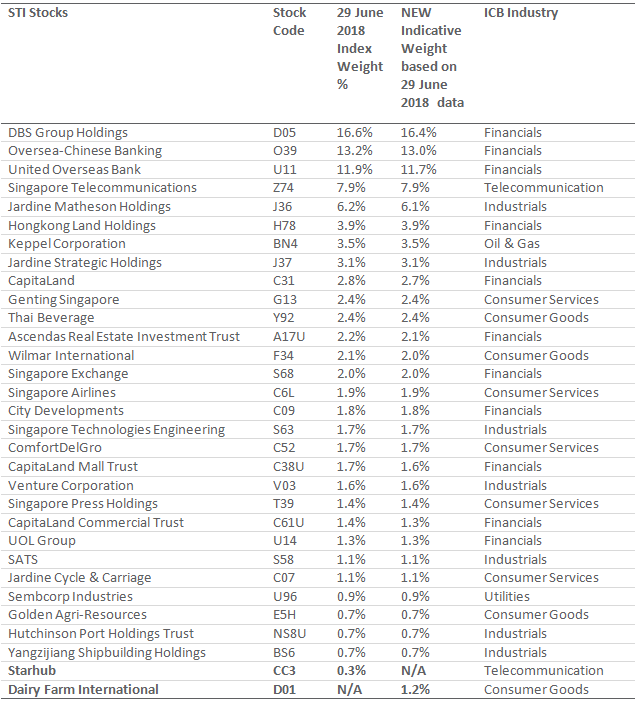 Note weights above are only indicative and based on relative weightings on 29 June 2018. Industry Classification Benchmark (ICB) weightings for the 10 biggest constituents are available from FTSE Russell here.

Dairy Farm International is a leading pan-Asian retailer. As of the end of June 2018, the Group and its associates in addition to joint ventures operated over 7,400 outlets and employed over 200,000 people. The Group had total annual sales in 2017 exceeding US$21 billion. More recently the Group reported earnings of US$225 million for its 1HFY18 (ended 30 June), up 6% from its 1HFY17 restated earnings on higher consolidated sales.

The Group operates under a number of well-known brands across four divisions. The principal brands are:


Dairy Farm generated a total return of 24.2% in the first 8 months of 2018 (in SGD terms), with institutional net buying totaling S$32 million.  On joining the STI, Dairy Farm will be one of five constituents quoted and traded in US Dollars. In the 2018 year-to-date the US Dollar Index has appreciated 3.4% to current levels near 95.100.

The STI is a free float adjusted market capitalisation weighted index representing the performance of the largest Singapore stocks which pass the size, free float, and liquidity screens.

The STI Reserve List is used in the event that one or more of the STI constituents are deleted during the period up to the next quarterly review. As detailed in the STI Ground Rules (click here) when a company is going to be removed from the STI the vacancy will be filled by selecting the highest ranking security by full market value in the Reserve List as at the close of the index calculation two days prior to the deletion.

There are further qualifications for the framework of the STI Reserve List in the case as Mergers, Restructuring and Complex Takeovers as described in Section 6.4 of the STI Ground rules.