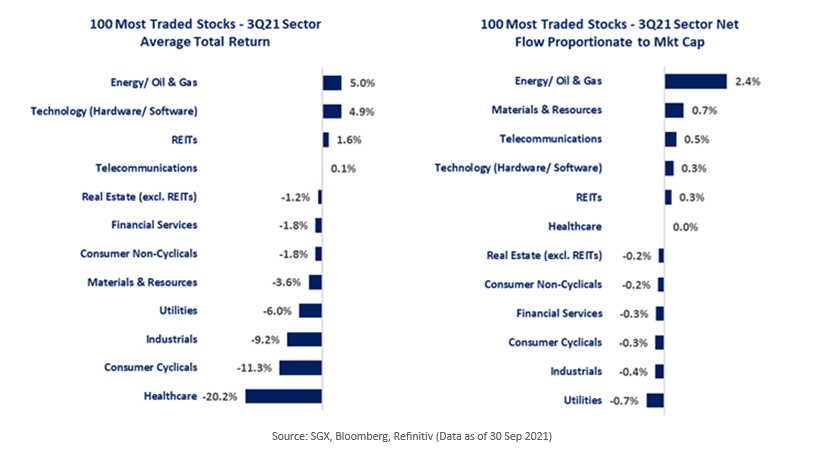 The 2/10 year UST yield curve, saw a comparatively steady quarter, ending at 120bps, similar to its end of June level. From 30 June to 4 August, the yield curve flattened from 120 bps to 100 bps, then from 4 August to 30 Sep, the yield curve steepened from 100 bps back to 120 bps. This saw measured moves in two global stock sectors that are important to the STI, and REITs:

For the quarter ahead, interest rate expectations will continue to be a key driver, in addition to how well listed companies and respective setors can contend with the ongoing COVID-19 constrained growth, global trade, demand for commodities as well as corporate strategic efforts to maximise operational efficiency.

The Energy Sector was also the strongest performing Sector across the globe in 3Q21 as well as the past week. Over 3Q21, the two stocks that represent the Energy Sector that are among Singapore’s 100 most traded stocks this year, Catalist-listed Rex International, and Mainboard-listed RH Petrogas, saw the highest combined net institutional inflows proportionate to sector market cap for the three months. While Brent Crude Oil gained 4.5% over the quarter, from US$75.13/bbl to US$78.52/bbl, the gains in September were greater, from US$72.99/bbl to US$78.52/bbl. The 7.6% monthly gain for Brent Crude Oil coinciding with RH Petrogas ranking as the strongest performer of the 100 stocks in September, with a 19% return, while Rex International ranked just outside the top 10 performers with a 9% gain. OPEC+ meets tonight via video conferencing to set production targets for November, with consensus expectations that ministers will continue to gradually raise supply, and possibly boost more than the already planned 400,000 b/d. In the September Monthly Oil Market Report, OPEC estimated that world oil demand will grow by 4.2 mb/d to 100.8 mb/d in 2022, exceeding pre-pandemic levels.

Together the 100 most traded stocks over the past seven months booked S$754 million of net institutional outflow in 3Q21, bringing the total net institutional outflow for the 100 stocks for the past 9 months to S$988 million. While the STI stocks typically dominate the inflows and outflows based on their comparative size in terms of market capitalisation, the 100 stocks do represent 12 sectors. Hence, another lens relevant to the flows is stock inflow/outflow in proportion to stock market capitalisation.

In terms of average performances over 3Q21, the Energy Sector generated the highest gains over 3Q21, while The Technology (Hardware/Software) Sector saw the second-highest average total returns, followed by REITs.

The average sector performances of the most 100 traded stocks in 3Q21, with sector flows proportionate to sector market capitalisation are tabled below.

Note the average performance can be skewed significantly by one stock’s performance. For instance, in 3Q21, Yinda Infocomm declined 15%, while Singapore Telecommunications, NetLink NBN Trust and StarHub averaged 5% total returns.

SingTel saw the most net institutional inflow of the 100 stocks in 3Q21, with S$199.8 million in net buying, and a 9% total return, while global peers declined 2%. The gains in the SingTel's share price since the company announced the issuance of S$1.0 billion 3.3% Subordinated Perpetual Securities under its S$10 billion Guaranteed Euro Medium Term Note Programme, has now seen the company marginally outpace global telecommunication indices over the past nine months. SingTel has also been a part of the recent wave of Singapore companies conducting strategic reviews, after announcing in May, it was weighing options for its digital marketing and cyber security businesses. Fitch Ratings noted the review signaled suggests a sharper focus on profitable growth and prudent capital preservation, and on 12 Aug reported a turnaround net profit of S$445 million for its 1Q22 (ended 30 June). Last week SingTel announced that Pension Fund Australian Super will buy a 70% stake in Singtel’s Australia tower network for A$1.9 billion.

StarHub also saw a 2% total return in 3Q21, with S$4.5 million of net institutional inflow, and the company proposing an investment in shares of MyRepublic Broadband on 22 Sep. The clear operational highlight of the proposal is to harness synergies across both broadband operation.

The Telecommunications Sector has changed significantly in Singapore in the past few years with the introduction of new mobile virtual network operators, providing broadband services, reducing the cost of mobile data, phone plans for users. At the same time, cost savings have been an important aspect of StarHub’s 3-year DARE for transformation program which began in October 2018. The program is expected to achieve costs savings of S$273 million by the end of next month.

While Real Estate was the least performing sector across the globe in 3Q21, CapitaLand Investment (“CLI”) generated a 15% return from its debut through to the end of the quarter, PropNex gained 15% over the quarter, while Hongkong Land edged 3% higher. The remaining seven developers and operators among the 100 most traded Singapore stocks averaged 6.5% declines. Since its debut on 20 Sep, CLI has averaged S$85 million in daily trading turnover, which is markedly higher than the previous entity, CapitaLand, which averaged daily trading turnover of S$37 million a day in the 2021 year through to 9 Sep, and S$33 million in 2020.

The recent performances of the 100 most traded stocks over the past 9 months are tabled below. Together the 100 stocks represent S$622 billion or 70% of the total S$888 billion market value of all stocks listed in Singapore. The table is sorted by highest total returns in 3Q21.