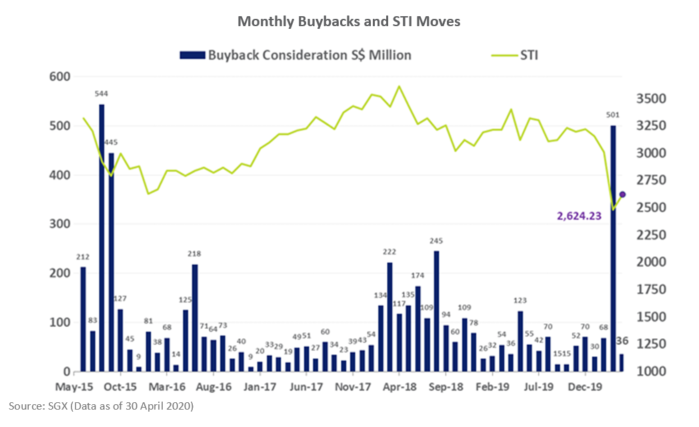 SATS was also one of five stocks to commence new share buyback mandates in April. The company bought its shares back over five sessions spanning 1 April to 7 April, buying back a total of 535,000 shares at an average price of S$2.93 per share (including stamp duties, clearing changes etc.). According to filings, Chuan Hup Holdings, Ellipsiz, Chip Eng Seng Corporation and Zhongmin Baihui Retail Group also commenced new buyback mandates.

A total of 38 primary-listed stocks conducted buybacks in Singapore in April, down from 65 in March, and up from 17 stocks in February.

Global Investments’ current mandate has seen the company buy back 6.67% of its issued shares excluding treasury shares as of the date of the approved buy back resolution on 25 April 2019. The company has seen its share price decline by 9.3% in the first four months of 2020, and has also proposed the renewal of the Share Buyback Mandate at the AGM currently scheduled for 29 June 2020.


The table below summarises the buyback considerations in April 2020. The table is sorted by the value of the total consideration amount for the month, which combines the amount of shares or units purchased and the purchasing price of the transactions. The five companies that commenced buyback mandates are in bold.

Share buyback transactions involve share issuers repurchasing some of their outstanding shares from shareholders through the open market. Once the shares are bought back, they can be converted into treasury shares, which means they are no longer categorised as shares outstanding. Motivations for share buybacks can include employee compensation plans (such as share option schemes or employee share purchase plans) or long term capital management. Buybacks can pick up amidst market declines that are driven by broader moves on international macroeconomic developments.

Share buyback information can be found on the company disclosure page on the SGX website, using the Announcement category and sub-category of Share Buy Back-On Market. As best practice, companies should refrain from buying back their shares during the two weeks immediately before its quarterly financial statements and one month immediately before the full-year financial statements.