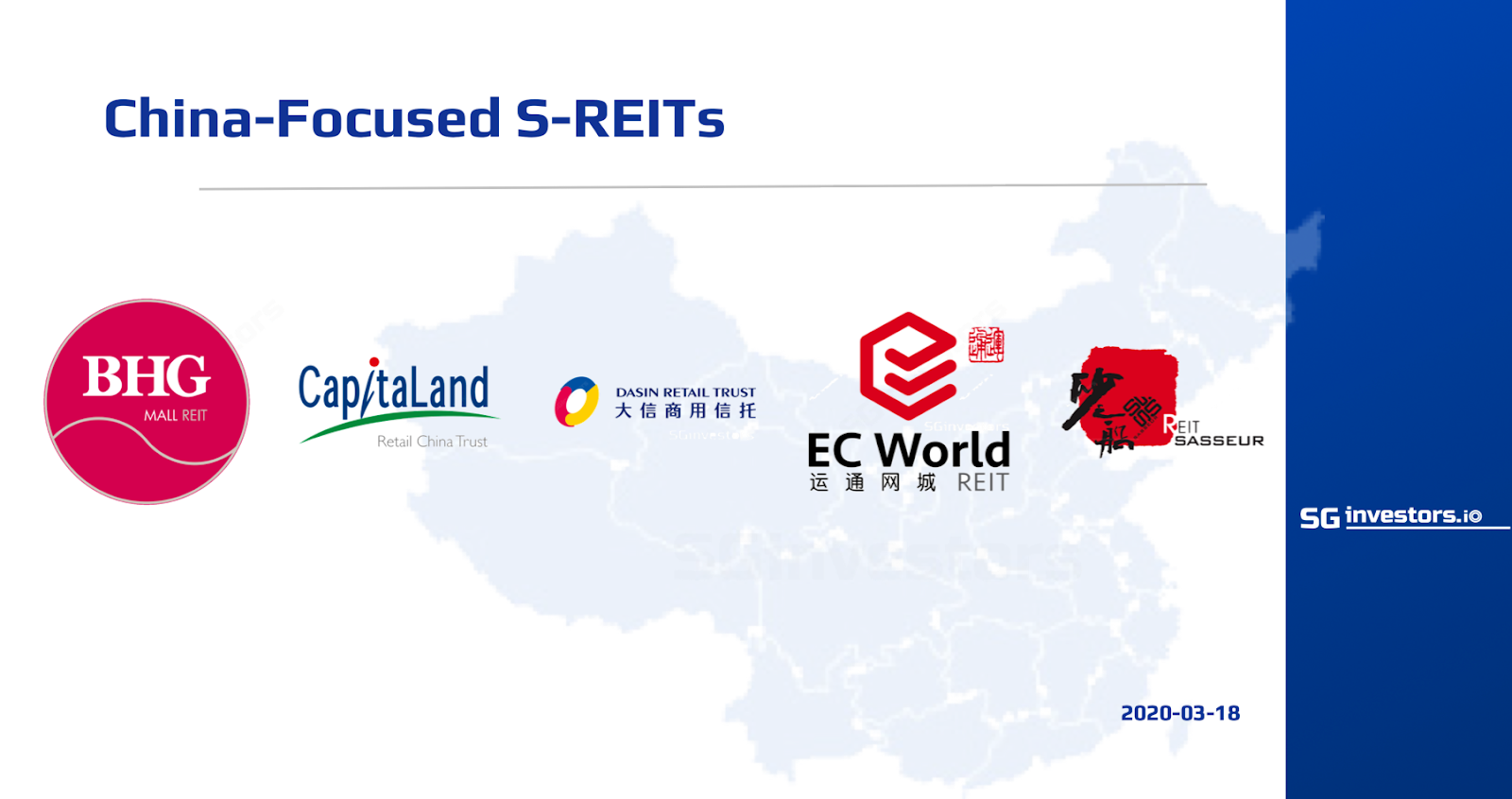 There are a group of 150 Real Estate stocks listed across the exchanges of Singapore, Hong Kong, Japan, Australia and Taiwan that report all their revenue to the PRC. As a group, the 150 stocks have generated a median decline of 13% in the 2020 year through to 17 March, following a median gain of 5% in 2019. This decline have brought the median Price-to-Book (P/B) ratio of the group from 0.75x at the end of 2019 to 0.62x at present.

By comparison, the 5 property trusts listed in Singapore that currently exclusively invest in PRC properties have averaged a 23% decline in the 2020 year through to 17 March, following an average total return of 21% in 2019. The relevant five trusts, sort by market value, are tabled below.

Note: Dasin Retail Trust is a business Trust and maintains an 8.5% yield based on unit price of S$0.80 and with distribution waiver.
Source: Thomson Reuters, Bloomberg, Company Financial Reports (Data as of 17 March 2020).

From their comparative strength in 2019, to the sharper declines in the 2020 year through to 17 March, the 5 property trusts have seen their P/B ratio converge to the foresaid peer group of 150 stocks. The average P/B ratio of the five property trusts stood at 0.89x at the end of 2019, a 19% premium to the peer group, that inter alia, could be attributed to REITs and property trusts generally maintain higher valuations than developers, which make up a large portion of the peer group.

The P/B premium of the 5 property trusts has since compressed as illustrated below, and the 5 trusts maintain an average P/B of 0.64x. Comparison of other Fundamental Factors

Based on their most recent filings, the 150 Real Estate stocks listed across the exchanges of Singapore, Hong Kong, Japan, Australia and Taiwan that report all their revenue to the PRC maintain a median Debt-to-Equity (DTE) ratio of 83% and Return-on-Equity (ROE) of 9%.

The respective trusts and their fundamental ratios are illustrated below.

CapitaLand Retail China Trust (CRCT) was listed on SGX on 8 December 2006, with a subscription rate amongst the highest ever registered in the Singapore stock market.  The initial portfolio comprised of seven retail malls in five key cities, and was the first pure-play China retail Real Estate Investment Trust (REIT) to list in Singapore. The value of the portfolio has grown from S$688.9 million at the IPO to S$3.2 billion as of the end of 2019.

Dividend distributions alone have seen investors who subscribed at the initial offer price of S$1.13 per unit had more than doubled their initial investment in returns through to 17 March 2020. Growing middle class and incomes and continued urbanisation were identified as key growth drivers for retail growth back in 2006.

Combined with the 3 REITs with initial portfolios that were exclusively invested in PRC-based properties (BHG Retail REIT, EC World REIT and Sasseur REIT), and Business Trust Dasin Retail Trust, the 5 trusts have properties located throughout the PRC as illustrated below. Back in 2006, China GDP stood at US$2.75 trillion, with a significant population of 1.311 billion. Since then, GDP has grown fivefold to US$14.1 trillion through to 2019, with the population steadily growing to 1.435 billion. Urbanisation and economic rebalancing has also seen tertiary industries become the biggest employer across China. Tertiary services now account for half the jobs in China, versus primary industries being the biggest employer in 2006 with tertiary jobs then making up one-third of the workforce.

Although labor costs have risen in recent years, IMF Executive Director for the PRC, Jin Zhongxia, notes that China now has the largest pool of reasonably priced professional labor force such as engineers and technicians with the number of college graduates in 2018 reaching a record high of 8.2 million, with science, technology, engineering, and mathematics majors (STEM) accounting for more than 50% of total graduates.

With its foundation of high savings rates, China’s significant investment-led stimulus between 2009 and 2012 has seen general government gross debt rise from 16.5% of GDP in 2006, to 40.3% in 2019, with the current account balance moving from 9.3% of GDP to 0.4% of GDP in 2018. Coinciding with the consistency and depth of SME structural reforms, Dr Jin estimates that domestic private owned firms currently account for over 60 percent of GDP and over 80 percent of employment in China.