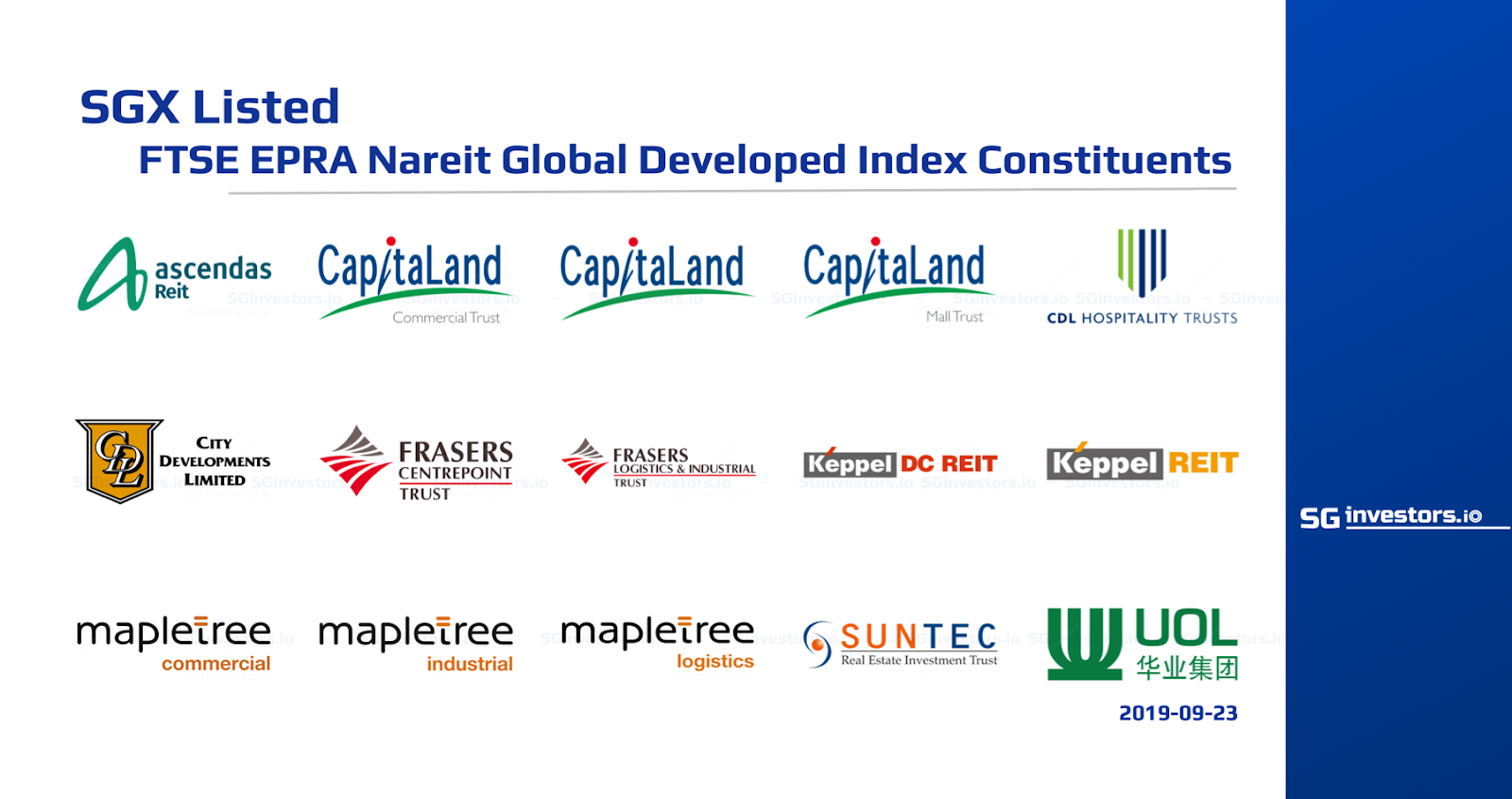 In this series, the FTSE EPRA Nareit Global Developed Index, which was launched in March 2009, currently comprises 13 Singapore constituents, with a weighting of 2.3% and a market capitalisation of over US$40 billion, according to the Index factsheet.

The Index is reviewed on a quarterly basis in March, June, September and December, based on data four weeks prior to the review effective date. For more details on index policies, eligibility criteria and methodology, click here.

Richard Ng, CEO of the manager of FCT, noted that being a part of the benchmark index for listed real estate companies and REITs worldwide would allow FCT to reach out to a larger pool of institutional investors. This would also raise the REIT’s profile in the international investment community, and further boost its trading liquidity, he added in a statement issued on 5 September 2019.

Both FCT and FLT are part of the TCC Group, a Thai beverage and real estate conglomerate owned by billionaire Charoen Sirivadhanabhakdi.

Likewise, Chua Hsien Yang, CEO of the manager of Keppel DC REIT, said in a statement dated 11 September 2019 that the Index inclusion would enhance Keppel DC REIT’s visibility to index funds, as well as support its liquidity and capital-raising efforts.

Beh Siew Kim, CEO of the manager of Ascott Residence Trust (ART), pointed out that the merger between ART and Ascendas Hospitality Trust to form the combined entity Ascott Business Trust would facilitate the inclusion of ART into the FTSE EPRA Nareit Developed Index. This could “potentially result in higher trading liquidity and a larger investor base for us,” she added in a 3 July 2019 statement.

Last month, Manulife US REIT also noted that its inclusion in the FTSE EPRA Nareit Index is “in sight”. “With an established track record and institutionalised investor base, we remain the US REIT of choice and look forward to entering the FTSE EPRA NAREIT Index in due course,” Jill Smith, CEO of the manager of the REIT, said in an earnings statement released on 13 August 2019.

The table below details the additions to the FTSE EPRA Nareit Global Developed Index this year, as well as REITs that are eyeing participation in the Index, sorted by market cap. The Index joiners and hopefuls have a combined market cap of nearly S$14 billion. The six trusts (of which two are undergoing a merger) have averaged a year-to-date total return of 32.4%, bringing their one-year and three-year total returns to 30.5% and 60.6% respectively.

Demand in the data centre industry remains strong, supported by robust growth in data creation and storage requirements, as enterprises and individuals continue to adopt cloud solutions. Demand for co-location data centres continues to be driven by increased take-up from hyperscale cloud players, and this demand is set to grow with their time-to-market needs, the REIT noted in its 16 July 2019 results statement, citing BroadGroup Consulting data.

Looking ahead, the development and adoption of new technologies such as 5G mobile networks, autonomous vehicles, virtual reality and the Internet of Things (IOT) will continue to contribute to the digitalisation wave, and correspondingly, global demand for data centres, it added.

It noted in a 23 July results statement that these properties are located in populous residential precincts, and are well-connected to public transport networks. The focus on necessity shopping, healthy mall occupancy and steady shopper traffic helps underpin the stable performance and resilience of its portfolio, it added.

FLT pointed to strong demand for industrial space in Australia, which is largely attributable to population growth, public infrastructure spending and the rise of e-commerce. As national take-up levels have consistently exceeded new completions, vacancy remains at five-year low levels across the three major industrial markets of Sydney, Melbourne and Brisbane, it added in its 26 July 2019 results statement.

For Germany and the Netherlands, take-up levels for logistics and industrial properties of above 5,000 square metres remains robust. At the same time, the REIT Manager continues to monitor key macro developments, including ongoing global trade tensions and Brexit, it added.