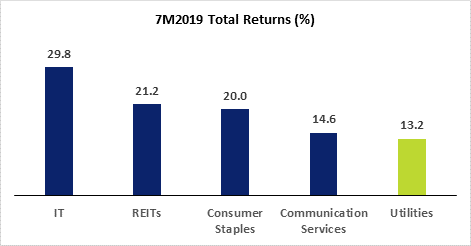 The Utilities Sector is typically made up of stocks that provide gas, electric or water, with population growth the underlying driver of demand for these services.  As a result, the sector has traditionally been seen as more defensive than cyclical in nature.

SGX’s Utilities Sector saw a new addition in July 2017 with the Catalist listing of Union Gas Holdings. Union Gas is an established provider of fuel products in Singapore, with over 40 years of operating track record in the business of Retail LPG, CNG and Diesel.

Between January and July 2019, the Utilities Sector registered a total return of 13.2%. It also garnered three straight months of net institutional inflows – from May to July 2019 – totalling S$11.0 million.

The table below details the five largest Utility plays on SGX, sorted by 7M2019 total return.

Key Shareholder to Propel Jinjiang Environment into Next Growth Phase

For the six months ended 30 June 2019, China Jinjiang Environment reported a 1.4% YoY rise in its profit after tax and minority interests (PATMI) to RMB253.8 million, while revenue gained 13.8% to RMB1.6 billion.

Under China’s 13th Five-Year Plan which promotes green development and green lifestyles, the government is continuously pushing for reduced volumes of solid waste sources and resource utilisation, which in turn will minimise the volume of landfills. This will create new opportunities and challenges for the waste-to-energy (WTE) industry, Jinjiang Environment said in its latest quarterly results statement.

The Group is also leveraging on the “One Belt, One Road” initiative to expand its footprint overseas, by bidding for projects and mergers and acquisitions, with a focus on Southeast Asia and other developing countries. It has secured five overseas projects – three in India, and one each in Brazil and Indonesia.

The potential entry of Zheneng Group as Jinjiang Environment’s largest controlling shareholder – following a deal to buy a 29.79% stake scheduled for completion in September 2019 – is also another boost. As one of the largest state-owned enterprises in Zhejiang Province, Zheneng Group has strong capabilities across the entire energy production value chain, and the alliance is expected to propel Jinjiang Environment towards a new stage of growth, it added.

For the half year ended 30 June 2019, China Everbright Water reported profit attributable to equity holders jumped 13% YoY to HK$420.5 million, while revenue rose 5% to HK$2.5 billion. As at 30 June, the Group had secured 121 environmental protection projects, with a total investment of approximately RMB22.4 billion.

The Chinese government had set a series of 2020 goals, focusing on the treatment of black and odorous water bodies as well as waste-water treatment in urban and rural areas. Now, with less than two years left, these tasks remain urgent, which in turn provide opportunities for capable and responsible service providers to outperform their peers, the Group noted.

As traditional areas in the water industry mature, services such as industrial waste water treatment, sludge harmless treatment, water plant and pipeline integration, as well as mixed-ownership reform of the local state-owned water enterprises, are expected to become new development trends. This will continue to unleash the industry’s growth potential.

On 8 May 2019, Everbright Water was listed on the Main Board of HKEx, achieving dual listing status in Singapore and Hong Kong.

For the second quarter ended 30 June 2019, Keppel Infrastructure Trust reported a Distribution per Unit (DPU) of 0.93 Singapore cents, bringing 1H 2019 DPU to 1.86 cents. This translates to an annualised distribution yield of 7.4%.

Distributable cash flow (DCF) for the quarter was S$45.8 million, bringing DCF for the first half of 2019 to S$94.2 million, reflecting gains of 26.3% YoY and 30.0% YoY respectively, the trust said in its latest quarterly results statement.

As part of its capital management efforts, KIT established a S$1 billion multicurrency debt issuance programme in May to diversify its funding sources. Part of the proceeds have been used to fully repay the outstanding equity bridge loan and part of the trust’s loan, thereby improving gearing to 34.2% from 44.3% in the previous quarter.

Looking ahead, the Trustee-Manager said it remains committed to delivering strong predictable cash flows to unitholders by capitalising on KIT’s well-diversified portfolio of highly defensive and resilient infrastructure assets and businesses. At the same time, it will continue to grow KIT through value-accretive acquisitions.