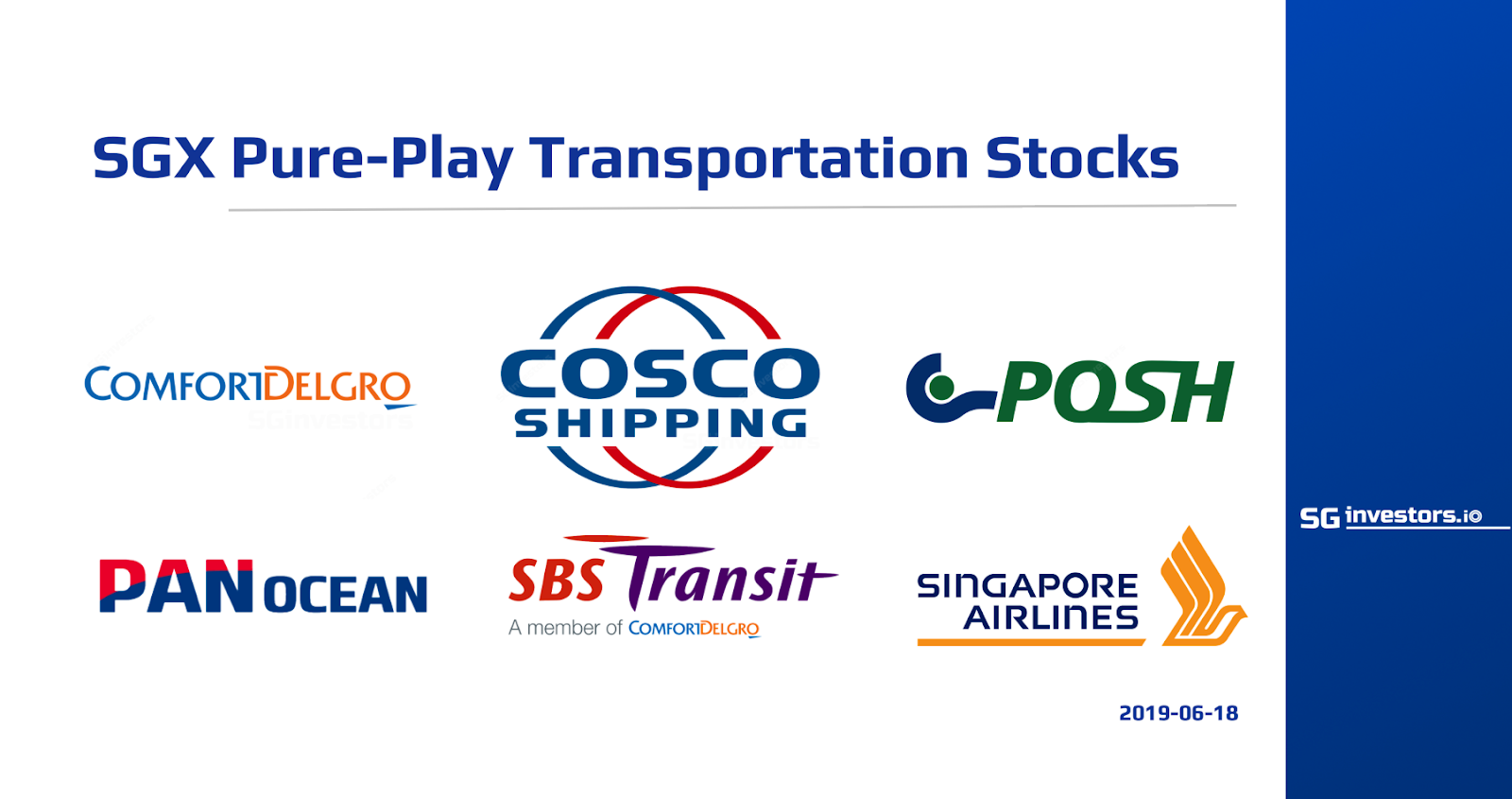 SGX lists more than 20 transport-related stocks, which include companies that provide air, road, rail and sea transport, as well as businesses that supply ancillary services to transport providers.

Among them, there are six pure-play transportation services stocks with a market capitalisation of above S$200 million – Singapore Airlines, ComfortDelGro Corp, Pan Ocean Co, SBS Transit, COSCO Shipping International, and PACC Offshore Services Holdings. These six pure transport plays provide air, bus, subway, taxi and shipping services, and have a combined market cap of more than S$20 billion. The majority of these companies are geographically diversified, deriving revenues from across Asia Pacific and Europe. Two of the six stocks – ComfortDelGro and Singapore Airlines – are also constituents of the benchmark Straits Times Index (STI).

The table below details the six pure-play transportation services providers on SGX with market capitalisation above S$200 million, sorted by market cap.

For the first quarter ended 31 March 2019, ComfortDelGro reported a 6.2% YoY rise in net attributable profit to S$70.4 million, while revenue increased 7.8% to S$947.3 million, buoyed by strong contributions from new acquisitions. In 2018, the Group invested close to S$0.5 billion in acquisitions – the most it has ever done so in a single year.

Looking ahead, ComfortDelGro noted that revenue from its Public Transport Services business in Singapore is expected to expand, amidst higher bus and rail service revenues as ridership increases. This is despite higher operating and maintenance costs for its rail division. Its Australian and UK bus services divisions are also likely to register higher to stable growth respectively, while taxi service revenues may fall due to keen industry competition.

“The Group will continue to build capabilities in strengthening our core businesses, keep abreast of technological advancements in land transport, pursue growth through overseas acquisitions, and continue our transformational initiatives,” ComforDelGro said in its 14 May 2019 results statement.

For the full-year ended 31 March 2019, Singapore Airlines reported a net attributable profit of S$682.7 million, down 47.5% YoY, even as revenue jumped 3.3% to a record S$16.3 billion, as the airline grappled with higher fuel prices and non-operating costs.

Looking ahead, SIA said the growth in forward passenger bookings is tracking positively against capacity injection, with premium cabin demand remaining robust. Most key markets, including those that have seen significant capacity growth such as the US, Japan, Indonesia and New Zealand, continue to expand at a healthy pace, while China’s international traffic growth rates have softened following increased market supply.

While fuel cost headwinds may persist on supply risks in the oil market, SIA’s significant fuel hedges should help to mitigate the impact of higher prices, it added.

Meanwhile, its Transformation programme – including digital transformation –continues to progress well, resulting in revenue growth and improvements to operational efficiency and organisational structure. “New industry-leading products and services continue to be rolled out on more routes, as new fuel-efficient aircraft enter the fleet. With these and other initiatives, the Group is well-positioned to navigate through ongoing challenges in the operating environment,” the flag carrier noted in its 16 May 2019 results statement.