Highlights of China-Related S-REITs and Developers 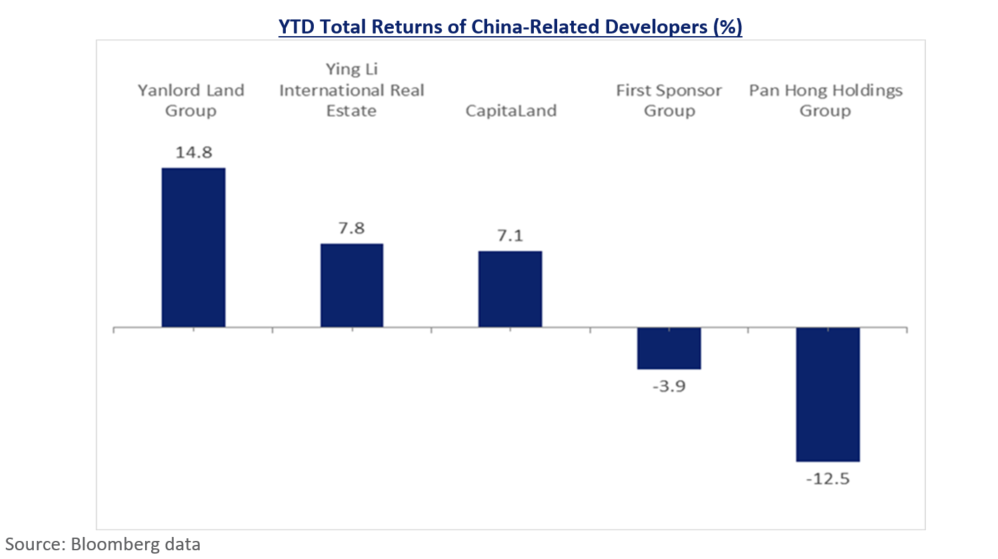 There are 34 Real Estate Investment Trusts (REITs), 5 Stapled Trusts and 3 property trusts listed on SGX. The sector has a combined market capitalisation of close to S$90 billion, with Retail, Industrial and Office REITs making up the largest segments.

Analysts have noted revived investor interest in S-REITs since the fourth quarter of 2018, driven by a flight to safety amidst rising risk-aversion, as US-Sino trade tensions continued to simmer, and global equity markets remained volatile.

The relatively strong fundamentals of S-REITs – about 80% of the trusts across various segments have hedged at least 70% of their debt with fixed rates, while all are required by regulation to have a maximum gearing ratio of 45% – should also help mitigate the negative impact of a rising interest-rate environment.

There are 10 REITs listed on SGX that report revenues to China, and they have a combined market capitalisation of nearly S$18 billion. These 10 trusts have averaged a total return of +6.6% in the 2019 year-to-date and a dividend yield of 7.2%.

The table below details the 10 REITs on SGX that report revenues to China, sorted by YTD total returns.

Source: SGX StockFacts and Bloomberg (Data as of 13 February 2019)


As for real estate developers on SGX, the 5 largest that report more than one-third of their total revenues to China have a combined market capitalisation of S$17.7 billion. Among these 5 developers, the 3 best performers in the YTD were: Yanlord Land (+14.8%), Ying Li International (+7.8%), and CapitaLand (+7.1%). Note that Yanlord and Ying Li reported 100% of their revenues to China, while CapitaLand and First Sponsor reported 27.04% and 32.24% revenues to China respectively.

The table below details the five real estate developers that report revenues to China, sorted by YTD total returns.

Earlier this week, China posted a surprise 9.1% YoY jump in its January exports, surpassing most economists’ forecasts of a contraction. This comes after its December exports unexpectedly shrank 4.4% YoY, the most in two years.

This year, the World Bank expects a further slowdown in the world’s second-largest economy, as headwinds increase amidst heightened trade tensions. The agency has forecast economic growth of 6.2% in 2019, slightly below previous projections as a result of weaker exports, and down from 6.5% expansion in 2018, it said in the January edition of its “Global Economic Prospects” report.

Between 1999 and 2014, China has averaged a significantly stronger annual economic growth rate of 9.6%, reaching as high as over 14% in 2007. In recent years, the moderation in its economic growth rates, which still remain above the developing-economy average, has coincided with the government’s policy of pursuing high-quality, rather than high-speed, growth.