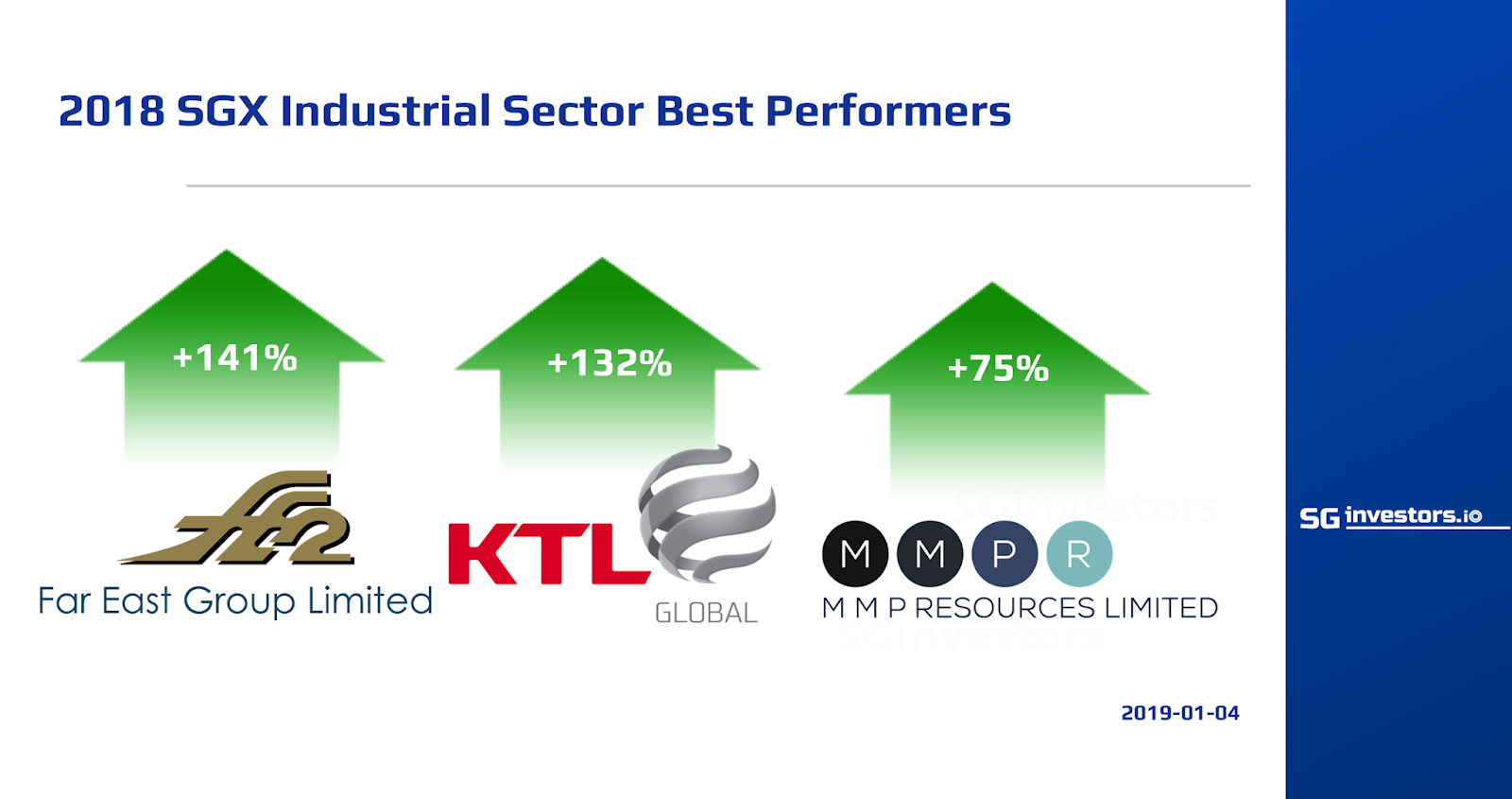 The 10 best-performing Industrials stocks with a market capitalisation value of over S$200 million have a combined market cap of about S$87 billion. They have averaged a 2018 total return of +12.7%, bringing their three-year and five-year total returns to +48.5% and +86.5% respectively. In comparison, the 30-constituent benchmark Straits Times Index (STI) registered a total return of -6.5% in 2018.

The table below details the 10 best-performing Industrials stocks with market cap above S$200 million, sorted by 2018 total returns.

In comparison, the 10 least-performing Industrials stocks with market cap above S$200 million have averaged a total return of -35.0% over the past year.

The company noted that its recent research and development (R&D) efforts have paid off, following the roll-out of another two new ranges of heat exchangers that includes use of natural gas to cut down its carbon footprint. With the sale of two properties in Singapore and one property in Malaysia, the Group now has a war chest to enhance and streamline its existing business and explore opportunities for mergers and acquisitions. For the full results statement, click here.

With the stabilisation of oil prices, the Group has seen an increase in orders from its Middle East and Indonesian customers. However, the O&G market is still characterised by oversupply, and the Group expects challenging conditions to continue for the next 12 months. For the full results statement, click here.

In response to SGX queries raised on 30 November 2018, KTL’s board of directors said it believes the Group and the Company are able to meet their short-term debt obligations and continue to operate as going concerns. It cited reasons including the recent implementation of several cost-cutting initiatives, significant reductions in inventories and rental expenses, and the option of divesting its investment properties as and when required. The Group is also in the process of obtaining a waiver from the banks for the technical breach of financial covenants for some of its loan facilities, so the banks can continue extending loans to the Group. The Company’s shareholders, Tan Tock Han and Tan Kheng Kuan, have also provided a letter confirming that they are willing and able to provide continuing financial support to the Group to enable it to operate as a going concern and for it to meet its obligations for at least 18 months from 30 June 2018. For the full statement, click here.

On 10 December 2018, KTL announced that it has restructured its board of directors with effect from Dec 10, with two appointments and a resignation. For the full announcement, click here.

With a legacy of more than 100 years, KTL Global is one of the world’s largest suppliers of premium steel wire ropes, synthetic ropes and subsea rigging equipment to the offshore oil & gas, marine and construction industries. It also provides testing, certification and maintenance services to the O&G market.

On 5 December 2018, MMP said it was acquiring a 50% stake in a joint venture company that owns an operating gas field in Russia for S$25 million, and will be deemed a “mineral, oil and gas company” post-acquisition. The joint venture company owns the Asia One gas field in Russia’s North-West region, valued at S$50 million by MMP-appointed independent valuer Gaffney, Cline & Associates. This would allow it to diversify into the natural gas and energy business, thus providing shareholders with better returns and long-term growth, it added. For the detailed announcement, click here.

MMP Resources is a construction company, focusing on acquisition and partnership opportunities predominantly within the Travel, Hospitality and Leisure industries.