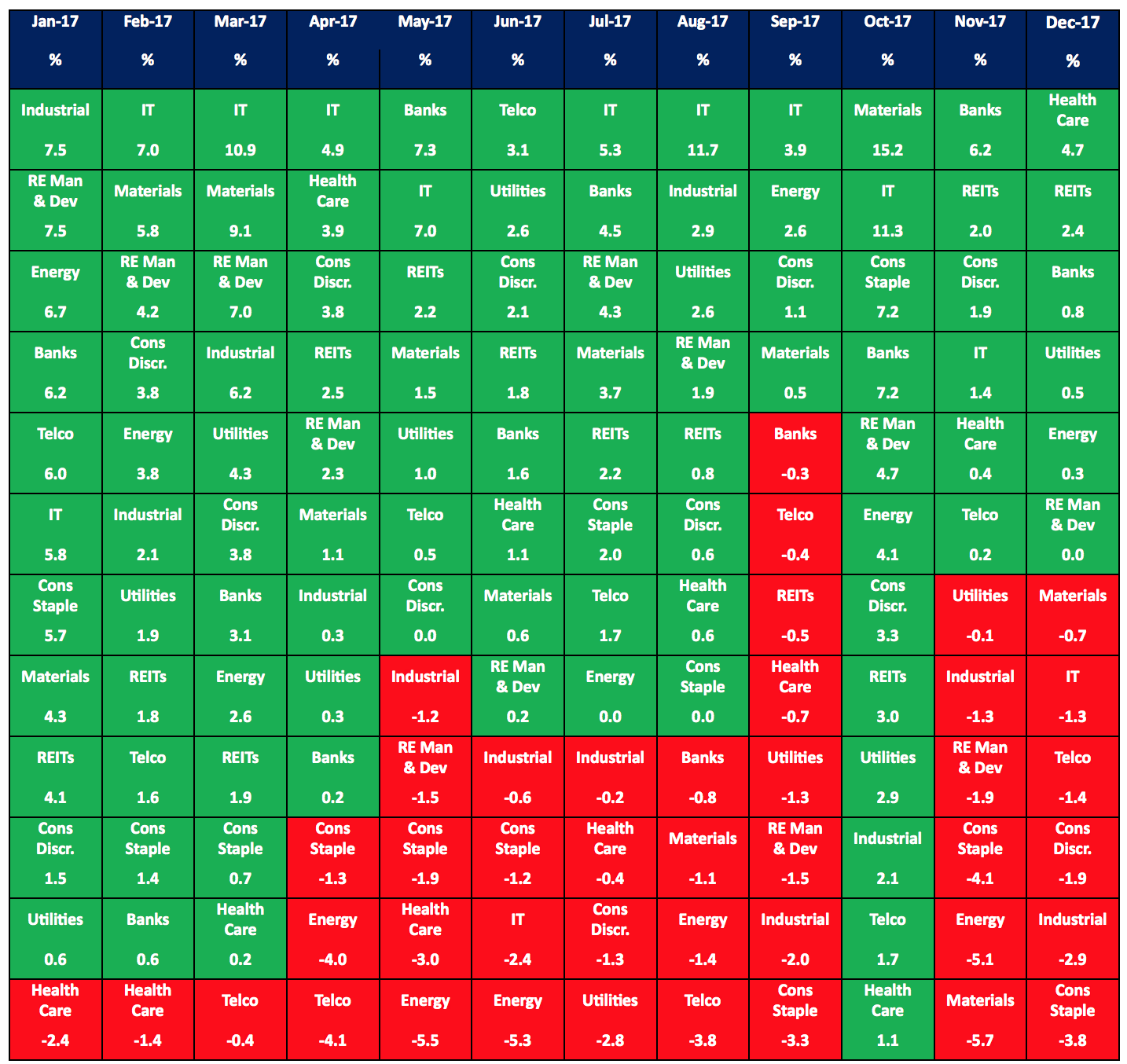 Singapore’s 10 largest capitalised Health Care stocks have averaged 3.3% price gains for the first five sessions of 2018, following on from an averaged 13.2% price gain in 2017. As detailed in the table below, the largest capitalised stock of the Health Care Sector is secondary listing IHH Healthcare Berhad which declined 9.3% last year. At the same time, the traded value of IHH Healthcare Berhad in 2017 was up 7.4%, from a relatively low base in 2016.

Note: Riverstone Holdings is not categorised to the GICS® Health Care Sector.
Source: SGX StockFacts, Bloomberg (Data as of 9 January 2018).

Of the 10 stocks tabled above, secondary listing Top Glove Corporation Berhad was the best performer over the first five sessions of 2017, in addition to 2016. For its 1QFY18 (ending 30 Nov) the Group reported its highest-ever quarterly sales revenue, at RM938.1 million, which represented a YoY increase of 19.4%. Its profit after tax, at RM105.9 million, rose 43.9% YoY. Management also reported that sales volumes (in terms of quantity sold) demonstrated growth of 17% YoY, which was led by nitrile glove sales volume. For more details click here.

The comparative price performances of the two REITS and the Business Trust investing in Health Care related properties are tabled below.

Note: ParkwayLife REIT and First REIT are REITs, whilst RHT Health Trust is a Business Trust. For more information on both asset classes, click here.
Source: SGX StockFacts, Bloomberg (Data as of 9 January 2018)

Clearbridge Health up 66% from IPO Price

On 18 December, Clearbridge Health listed on Catalist raising S$24.6 million and opening with market capitalisation of S$134.7 million. The stock ended yesterday at 46.5 cents, which was two-thirds higher than the IPO price of 28 cents.

As illustrated below, Singapore’s Cyclical Sectors all performed better than the Defensive Sectors in 2017.

Note: Delong Holdings 814% gain in 2017 accounted for more than half of the gains for the Materials Sector (or 43% of the 83%) in 2017, implying the remainder of the Materials Sector gained 40%.
GICS® Sector performance is weighed to market cap at the end of each period, is in SGD and includes reinvested dividends.
Source: SGX StockFacts & Bloomberg.

The Health Care Sector was the strongest of the Sectors in the last month of 2017, with market capitalisation total returns of 4.7%. The Sector has added 2.9%, using the same metrics, over the first five sessions of January 2018.

* Note: Delong Holdings’ 145.0% gain in October accounted for almost three quarters of the gains of the Materials Sector (or 10.9% of the 15.2%) implying the remainder of the Materials Sector gained 4.3%.
For monthly data, the Indicative GICS® Sector performance is weighed to market cap at each month end, is in SGD terms and includes reinvested dividends.
Source: SGX StockFacts & Bloomberg.

The indicative sum of the best performing sectors for each of the 12 months across 2017 was a total return of 88%. As illustrated above, the 88% total return, weighed to market capitalisation, started with the Industrials Sector returning 7.5% in January and ended with Health Care adding 4.7% in December. The combined decline for the least performing Sector of each of the last 12 months was 37%. By comparison, over the 12 months the STI generated a total return of 22%. Note this does not include any transactions fees which would be associated with the sector rotation.